In just five years England’s Atlantic Links, a collection of six championship links courses in South West England, has established itself as a premier golfing destination in the United Kingdom.

The reputation of this relatively-unknown cluster of golfing gems has been further enhanced through the continued inclusion of the Atlantic Links courses in recognized course ratings compiled by top golf publications and through the hosting of a number of top amateur championships over the last few years.

The inclusion of all six Atlantic Links courses in the UK’s Golf World magazine’s 2012 rankings for the ‘Top 100 Golf Courses in England’ has reinforced the links collective as one of the highest quality golfing destinations in the country.

The championship links of Saunton East in Devon and St Enodoc’s Church Course in Cornwall were both ranked in the top 20, in 8th and 16th position respectively, whilst Burnham & Berrow in Somerset came in at number 33. The three other courses that complete the offering all made the top 70 with Cornwall’s Trevose in 53rd spot, Royal North Devon at 62 and Saunton West in 68th slot.

All six courses also featured in last year’s Golf Monthly’s ‘Top 100 Courses UK and Ireland 2012’. Burnham & Berrow ranked the most highly at number 37 and was closely followed by Saunton’s East Course at 39 and St Enodoc up four places to 41st position. The other three Atlantic Links courses also came well inside the top 100 with Saunton West in at number 57, Trevose in 70th spot and Royal North Devon placed in 75th position. 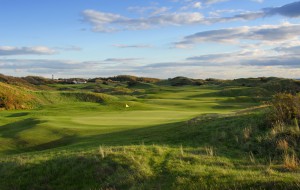 Over the years, these courses have been honoured with the hosting of many top amateur championships, further testament to the quality of the links. For example, in 2008 Trevose staged The Brabazon Trophy (English Men’s Open Amateur Stroke Play Championship) whilst in 2011 it was the turn of Burnham & Berrow to host The Brabazon Trophy  – for the fifth time – and the R&A Boys Championship and in doing so entered golfing history by becoming the first course to hold both championships in the same year. Next year Saunton’s East and West courses will play host to the English Amateur Championship, the blue riband men’s event on England Golf’s 2014 calendar.

“In the five years or so since we established the offering, we have attracted a great many visitors from Europe and the US who have been both surprised and delighted to discover this relatively-unknown group of glorious links courses that had been overshadowed by the Scottish and Irish links for far too long.

“Meanwhile each course in its own individual right continues to receive plaudits from the world of golf and to be awarded the honour of hosting top amateur championships which have further enhanced the growing reputation of the Atlantic Links as one of the UK’s most prestigious golfing destinations.”

In addition, England’s Atlantic Links’ courses boast the combined appeal of history, tradition and variety which is complemented by numerous off-course attractions along the Atlantic coastline.

England’s South West is bursting with attractions including pretty coastal towns like  Clovelly and Ilfracombe in Devon whilst bustling market towns such as Wadebridge and Barnstaple and charming fishing villages like Port Isaac, Rock and Padstow can be found along the north Cornish coast. Further up the coast, historic towns like Weston-super-Mare and the spa town of Bath, near Burnham & Berrow, are ideal destinations to round off a golfing adventure.

The region’s rich culture features the inimitable Barbara Hepworth Museum and Tate St Ives, displaying the very best in modern and local art, the renown Eden Project and fascinating Lost Gardens of Heligan whilst outdoor activities such as surfing around Newquay and walking and horse riding in Exmoor National Park are as good as anywhere in the British Isles.

The gastronomic delights of the South West are not to be missed either, from the exceptional Padstow seafood restaurants of famous local chef Rick Stein and a variety of other Michelin-starred restaurants, to real English ale and authentic pub grub in an abundance of traditional country pubs.

The temperate micro climate allows year-round golf with the gentler winter conditions enabling the greenkeepers to maintain their courses in immaculate condition throughout the changing seasons.

In terms of travel, the nearby M5 motorway and A39 “Atlantic Highway”, and international airports at Bristol, Exeter and Newquay, ensure easy accessibility for all visitors.